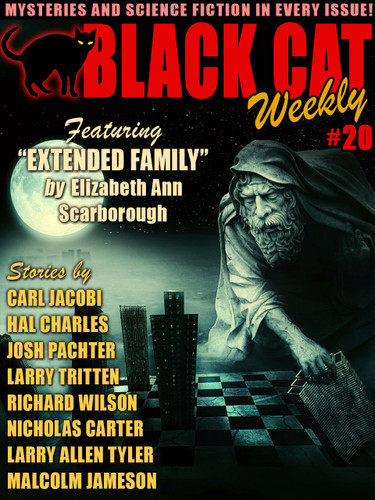 Our mysteries this issue include Josh Pachter’s “The Secret Lagoon” (Michael Bracken’s pick), Larry Allen Tyler’s “Just a Little Before Winter’s Set In” (selected by Barb Goffman) and a solve-it-yourself from Hal Charles (the writing team of Hal Blythe and Charlie Sweet). A futuristic detective tale by Larry Tritten, and a classic Nick Carter novel from 1903, The Plot That Failed, round things out.

On the science fiction & fantasy side, we have a vampire classic by Carl Jacobi, “Revelations in Black” (which was also the title story of one of his Arkham House collection); “Bullard Reflects,” by Malcolm Jameson, which is classic SF from Astounding; “Strike,” by Richard Wilson, about newspaper reporters coming a shipping strike in space; and “Three Bananas,” by Larry Tritten—which is one of his gonzo cross-genre mashups. Fun stuff. Plus the already-mentioned “Extended Family,” by Elizabeth Ann Scarborough. (Did we mention that this is one of those stories you won’t want to miss?)