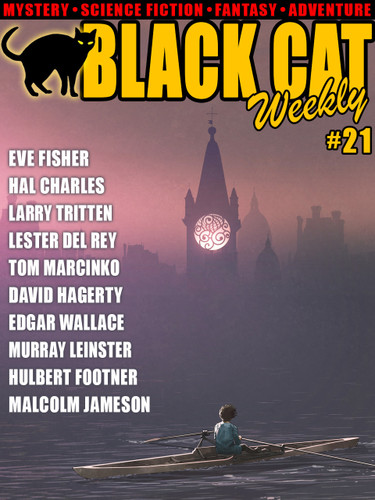 For mystery readers, Michael Bracken brings us an original tale by Eve Fisher—“The Ghost of Eros” features art crime of a most creative sort. Barb Goffman’s presents an action-packed tale by David Hagerty. “A Photo’s Worth” features an actress, a paparazzo, San Francisco, and scancal—a great read. Hal Charles (the writing team of Hal Blythe and Charlie Sweet) brings us another solve-it-yourself mystery. And we have a classic mystery featuring Madame Storey from Hulbert Footner, and a British suspense novel by Edgar Wallace.

Science fiction and fantasy fans will enjoy a 1950 short novel from Murray Leinster, a classic space opera. Leinster was one of the greats of the science fiction field. He published more than a thousand stories over a distinguished six-decade career. “Planet of the Small Men” is pulp adventure in grand space opera tradition—and one I wish had been expanded to novel length. It’s from Thrilling Wonder Stories, and I don’t believe it’s ever been reprinted. Plus we have dark fantasy stories by Tom Marcinko (Cynthia Ward’s selection this issue) and Larry Tritten (whose work we’ve been running regularly—a real change of pace for him). Plus classics by Malcolm Jameson and Lester del Rey.

On the mystery side, Black Cat Weekly #25 has an original mystery by Joseph S. Walker, thanks to edi