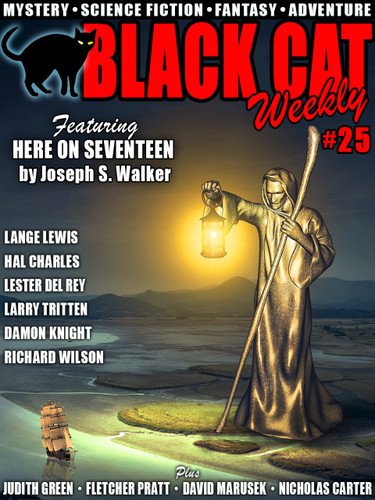 On the mystery side, Black Cat Weekly #25 has an original mystery by Joseph S. Walker, thanks to editor Michael Bracken, and Barb Goffman has tracked down an Edgar Award nominee by Judith Green. Plus we have a solve-it-yourself mystery from Hal Charles (the writing team of Charlie Sweet and Hal Blythe), and novels by Lange Lewis and Nicholas Carter.

On the fantastic side, Cynthia Ward has selected “Cabbages and Kale” by David Marusek for this issue. Plus we have modern and classic tales by Larry Tritten, Lester dey Rey, Fletcher Pratt, and Richard Wilson. Good stuff!

This issue features a welcome return by acquiring editor Darrell Schweitzer. He contributes a rare i