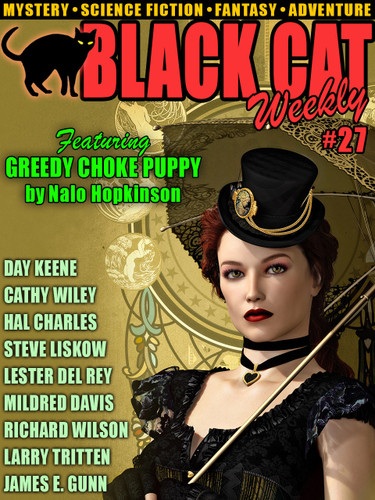 This issue features a welcome return by acquiring editor Darrell Schweitzer. He contributes a rare interview with best-selling Game of Thrones author George R.R. Martin. It originally appeared in Science Fiction Review in 1976—and as Darrell says, “this is somewhere between oral history and paleontology.” Martin discusses such things as the market for fantasy fiction (not much of one...at least in 1976!) and the way he works on stories. Fascinating stuff.

For this issue’s mysteries, we have an original story by Steve Liskow, who is one of the best short-story writers currently working in the field, courtesy of editor Michael Bracken. Barb Goffman has selected “The Maine Attraction” (a New England murder mystery) by Cathy Wiley. And there are classics by Day Keene and Mildred Davis. Plus, of course, a solve-it-yourself tale by Hal Charles (the writing team of Hal Sweet and Charlie Blythe).

For the fantastic tales, this issue features Nalo Hopkinson’s brilliant “Greedy Choke Puppy,” selected by Cynthia Ward. Simply terrific. Larry Tritten’s SF humor piece, “The Science Fiction Book of Lists” will earn more than a few chuckles. Plus there are classic SF tales by James E. Gunn and Lester del Rey. Plus a ghost story by Richard Wilson. And a story from Weird Tales by Day Keene (which also does double-duty as a mystery!)

On the mystery side, Black Cat Weekly #25 has an original mystery by Joseph S. Walker, thanks to edi