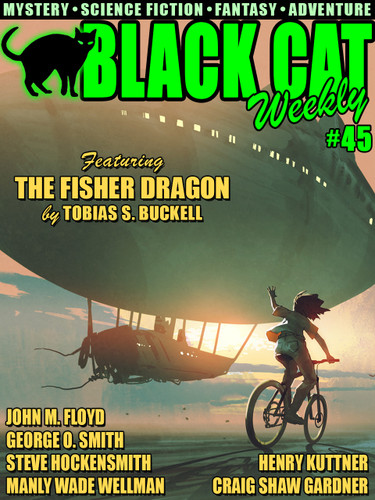 Welcome to Black Cat Weekly #45. This is an fun issue, and I’ve selected Tobias S. Buckell’s fantasy “The Fisher Dragon” as the cover story. (I must admit to having a fondness for dragons. The very first story I sold professionally, way back at the dawn of time when I was 16 years old, was about a dragon. And they appear in several of my novels, most notably Master of Dragons.) Thanks to acquiring editor Cynthia Ward for selecting it.

Black Cat’s other acquiring editors are represented in this issue, too—Michael Bracken selected an original mystery from John M. Floyd, and Barb Goffman has a tale about a retired detective by Steve Hockensmith (whose “Holmes on the Range” series of historical mystery stories are must-reads, as far as I’m concerned. Check then out if you get a chance.) And last (but not least), Darrell Schweitzer unearthed one of his paleo-interviews for us—this time with Craig Shaw Gardner. It's from the 1990s, when Gardner had just become a best-selling author, thanks to his Batman movie novelization.

And we have classics by George O. Smith, Henry Kuttner, and many others, including a 1915 Nick Carter mystery novel. And, of course, a modern solve-it-yourself mystery from Hal Charles (the writing team of Hal Blythe and Charlie Sweet).

Welcome to Black Cat Weekly #44. This is an amazing issue, with quite the all-star lineup. First off

Welcome to Black Cat Weekly #46. This is one of our longest issues to date, thanks to no less than 3

Welcome to Black Cat Weekly #43. If this isn’t the best issue we had to date, it’s prett

An exciting game is afoot, thanks to acquiring editor Michael Bracken! Yes—we are delighted to

Fletcher Pratt, a master of science fiction and fantasy, co-author of the acclaimed "Incomplete Ench

Welcome to Black Cat Weekly #47. Another fine issue is at hand—with mysteries from Peter Loves