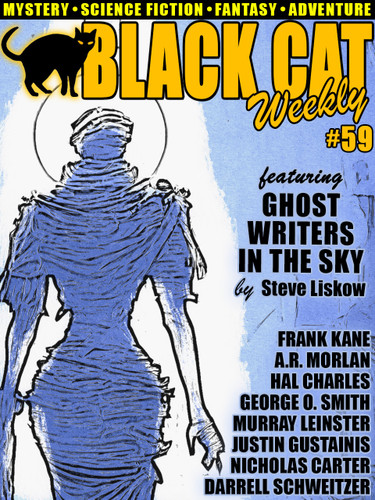 Our 59th issue puts us firmly into one of the happiest seasons of the year, Halloween! So fun and frights abound, with extra spooky content—starting with “Ghost Writers in the Sky,” an original tale by Steve Liskow, courtesy of Acquiring Editor Michael Bracken. (It does double-duty as mystery and fantasy, as does Acquiring Editor Barb Goffman’s pick, “Deal Breaker,” by Justin Gustainis.)

Alas, we have no selection from Cynthia Ward this time, but hopefully she will be back in short order. I picked up one of my favorite dark fantasies by another Acquiring Editor to fill the hole: “Peeling It Off,” by Darrell Schweitzer. Plus an uncanny tale by A.R. Morlan that would have been at home in Weird Tales, then a Victorian-era occult novel by Marie Corelli round things out.

For fans of traditional mysteries, we have a pair of great private detective novels: About Face, by Frank Kane, and a vintage Nick Carter novel from 1903. On the science fiction side, we have contributions by Murray Leinster and a novel by George O. Smith.

Overall, this is one of our most eclectic issues, but there is bound to be more than a few tales to suit everyone’s taste.

Black Cat Weekly's 56th issue is another done with most of the staff on vacation. But we’

Our 55th issue is packed with good stuff—as you will soon discover! Our Acquiring Editors have

Our 54th issue is another good one. On the mystery side, we have a great original tale by Jacqueline