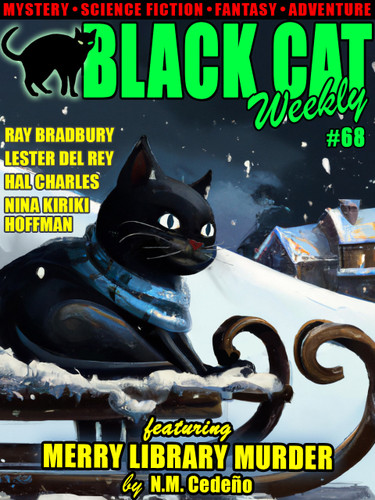 View Details
Our 68th weekly issue has several holiday tales to spice up the season, including an original (“Merry Library Murder,” by N.M. Cedeño, courtesy of Acquiring Editor Michael Bracken) and some modern classics by Heather Critchlow (courtesy of Acquiring Editor Barb Goffman) and one of my own favorite authors, Nina Kiriki Hoffman (she’s amazing!) Cynthia Ward has selected an exciting fantasy from Milton J. Davis, plus we have great tales by Ray Bradbury, Lester del Rey, and James Holding, a Sexton Blake tale by Hal Meredith, and of course a solve-it-yourself puzzler from Hal Charles. It’s a fun issue.

Our 69th issue is being put together in the chaos of the holiday season. It’s hard, but the te

Our 66th issue kicks off our holiday festivities, thanks to Katherine Fast’s “Reunion&rd

Mystery / Suspense: “The Intern,” by Tammy Euliano “Time After Time,” by Ha

This is a special issue—our 50th, as you may have noticed from our cover. To celebrate, all pa