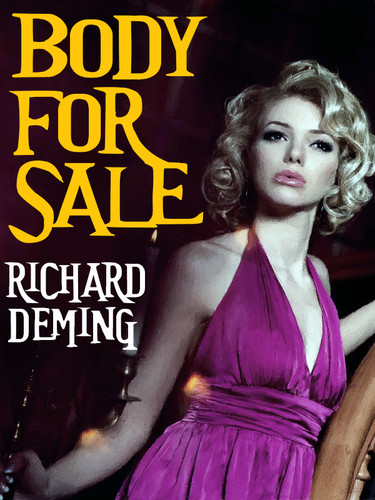 Tom Cavanaugh never quarreled about the means involved, just so long as the end was worth grabbing for. He was about to get fired when he blackmailed his boss into making him district sales manager.

Helen Mathews was no lily-white, either. She was rich, beautiful, and as coldly calculating and cruel as a jungle animal. When she learned her husband might kill her for her money, she wasn't frightened. All she wanted was revenge.

She let Cavanaugh sample her lush body and then made him an offer. For killing her husband, Cavanaugh could marry her and share her wealth.

Cavanaugh hesitated, but his decision was inevitable. He set out to commit the perfect murder.

Casey Denver, soldier of fortune, is back from helping Castro win his revolution, and he knows a sec

Anything But Saintly, by Richard Deming (epub/Kindle/pdf)

The violent death of a call girl leads to all-out war on the underworld. A

Pete Sawyer is a private eye of a different kind. The son of a World War II American pilot and a

Watch Out for a Small Man, by H. Bedford-Jones (epub/Kindle/pdf)

The Slaves of Moxon and Other Tales of Scientific Romance, by Arthur Jean Cox (epub/Kindle/pdf)

In "The Slaves of Moxon and Other Tales of Scientific Romance," the science fiction world has to dea