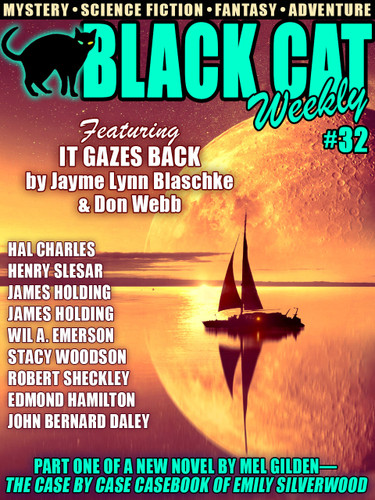 This issue, we have more original stories than ever before. Editors Michael Bracken and Cynthia Ward have brought in new tales by Wil A. Emerson and the writing team of Jayme Lynn Blaschke and Don Webb, and I snagged magazine rights to Mel Gilden’s new novel, The Case by Case Casebook of Emily Silverwood. Mel’s story is a new and thoroughly modern take on the Mary Poppins theme. Wil Emerson has a study on the dynamics of detective partners. And Blachke and Webb’s story (as Cindy Ward put it) “reveals the connections between Nietszche’s abyss, Lovecraft’s god-monsters and non-Euclidean spaces, and Cordwainer Smith’s monsters of subspace.” Wow!

Not to be outdone, Barb Goffman acquired Stacy Woodson’s first story, which won the Ellery Queen’s Mystery Magazine Reader’s Award. And, of course, we have a solve-it-yourself mystery from Hal Charles, a historical adventure novel from Edison Marshall, and a slew of great science fiction stories from such masters as Henry Slesar, and Edmond Hamilson. And a World War II fantasy from Malcolm Edwards.

Welcome to Black Cat Weekly #33. The astute will notice that this issue is being released early&mdas

Welcome to Black Cat Weekly #31. This time, the lineup includes pretty much everything fans look for

Here is the 34th issue of Black Cat Weekly, packed with more than 500 pages of great reading, w