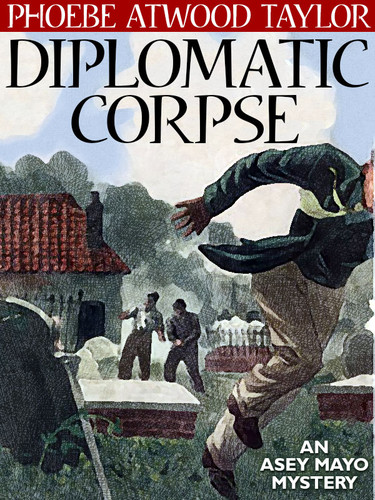 "Buff" Orpington arrived in picturesque Quanomet to find the little Cape Cod town in ferment. A stupendous pageant of American history was being staged, and the inhabitants of Quanomet had time and thought for nothing else. But all was not as it should be in the small community. There had been more curious incidents than could be attributed to the usual petty jealousies and maneuverings for the best parts and positions. Quanomet was, in fact, in its modest way about to make history, and Buff finds himself taking an uncomfortably prominent role when he discovers a newly made corpse in the cemetery. After too long an absence, Asey Mayo, the salty Cape Cod Sherlock, returns in fine form to solve the baffling murder in his own inimitable way.

The Corpse That Talked, by Richard Telfair (epub/Kindle/pdf)

She was two women: one who gave her body willingly...the other kept a promise to a man who had died

When a famous author turns up dead, it's up to Asey Mayo to find the killer. First in the series.

Beginning with a Bash, by Phoebe Atwood Taylor (writing as Alice Tilton) (epub/Kindle/pdf)

The sign said COME IN AND BROWSE—IT’S WARM INSIDE. Martin Jones made the mistake of his life when he

Tomorrow Parke Gardner will be wed -- if he can survive a night of knockout drops, bullets, and boob

The Slaves of Moxon and Other Tales of Scientific Romance, by Arthur Jean Cox (epub/Kindle/pdf)

In "The Slaves of Moxon and Other Tales of Scientific Romance," the science fiction world has to dea

A Collector of Ambroses, by Arthur Jean Cox (epub/Kindle/pdf)

The Girl with the Silver Eyes, by Dashiell Hammett (epub/Kindle/pdf)

Women and naval secrets, trick messages and seaplanes--these were all about to figure in Bruce's lif

Cheops' daughter, the story goes, earned the money for her pyramid by practicing what was even then