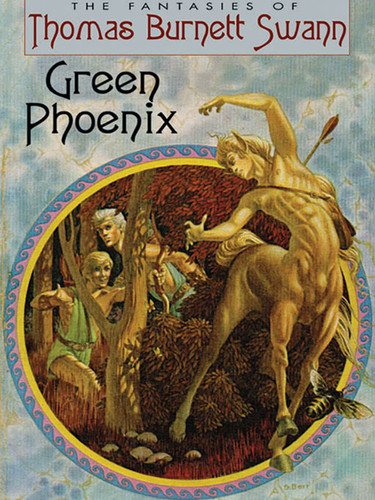 Thomas Burnett Swann (1928-1976) earned a distinguished reputation among writers of science fiction, one that caused his enthusiastic following to nominate him again and again for awards. Unique in his talent, his novels dealt not with the far future, but with the enigma of the past. Prior to the dawn of human history, the Earth did not belong solely to humanity -- there were other intelligent species still fighting a last-stand battle against extinction.Remembered today only in legend, these are creatures of the trees and water, beings that combined beast and man, with strange lore of their own and sciences lost to the human victors.

GREEN PHOENIX is a tour de force of the final stronghold of the prehumans against the last legion of fallen Troy.

"He writes his own golden thing his own way..." --Theodore Sturgeon, The New York Times

"Swann's neo-romantic fantasies of the past are unique. He uses the stuff of myth with twists and inventions all his own." --The Village Voice

After being unavailable for many years, the complete works of Thomas Burnett Swann are being reprinted by Wildside Press -- all 16 novels and his complete short stories.

The Forest of Forever, by Thomas Burnett Swann (epub/Kindle/pdf)

Here in THE FOREST OF FOREVER dwells the last Minotaur, and here too are the other lingering dweller

The Minikins of Yam, by Thomas Burnett Swann (epub/Kindle/pdf)

"Like most of Swann's novels, The Minikins of Yam offers us an outré ancient world — in

Day of the Minotaur, by Thomas Burnett Swann (epub/Kindle)

In DAY OF THE MINOTAUR, modern readers at last have an opportunity to rediscover the imaginative

Queens Walk in the Dusk, by Thomas Burnett Swann (epub/Kindle/pdf)

Thomas Burnett Swann was a brilliant fantasy writer who died in 1976. He wrote primarily about the a

When Bronx and the Old Man return to Yellow Gulch, they discover the alcohol springs have played out

Poison from a Dead Sun, by Michael Hemmingson (epub/Kindle/pdf)

Since childhood, Noel has had a psychic connection to the nuclear fish monster, Goldgotha, whom he c

August is just crazy in Greenwich Village when you're a cop—a full moon, an exceptionally heat

Fel Blackmane is a pirate, rogue, and thorough scoundrel. But he also has a sense of adventure secon