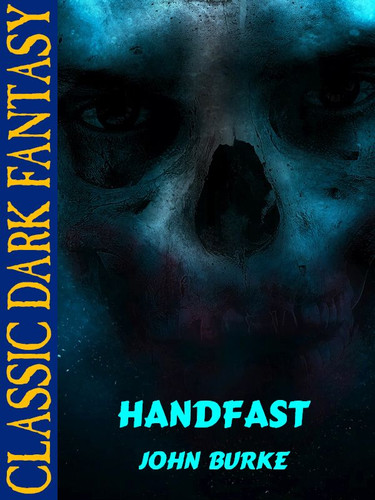 Handfast is a supernatural tale by British fantasist John Burke.

When he next saw her, on the river towpath, Marion was with him but saw and heard nothing. Yet Rachel was drawing closer and closer: a shadow wreathing closer not to Alan, he abruptly realised, but to Marion, twining the filaments of her web to shadow Marion’s face in a fine caul which might have been a widow’s veil—or, when the sun suddenly brightened it, a bride’s.

Then the shadow fled. Marion brushed her cheek as if a strand of hair had tickled it. He hurried the two of them back into the familiar streets. Marion was very quiet for once, glancing back a couple of times with a puzzled frown.

The Adjusters, by John Burke (epub/Kindle)

Alun said: ‘Want to go anywhere special?’ She shook her head. They sat down in the localized warmth