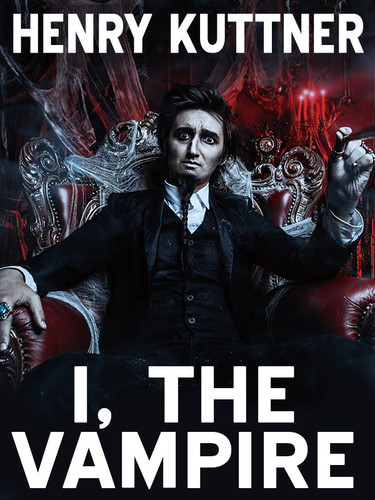 I said, “What’s this about the vampire man?”

“Three cheers for publicity,” I said. “Look what it did for Birth of a Nation. But where does the vampire angle come in?”

“Mystery man. Nobody can take a picture of him, scarcely anybody can meet him. Weird tales are told about his former life in Paris. Going to play in Jack, Red Thirst. The kind of build-up Universal gave Karloff for Frankenstein. Our Chevalier Futaine”—she rolled out the words with amused relish—“is probably a singing waiter from a Paris cafe. I haven’t seen him—but the deuce with him, anyway. Mart, I want you to do something for me. For Deming.”

The Eyes of Thar, by Henry Kuttner (epub/Kindle)

She spoke in a tongue dead a thousand years, and she had no memory for the man she faced. Yet he had

We Are the Dead, by Henry Kuttner (epub/Kindle)

A poignant, brief tale of a weird experience in Arlington Cemetery by a master of the weird tale.

A brief, poetic story about an alien city—and a metallic doom! (You can tell Kuttner was readi

She came off the Androids, Inc., production line in September, 2241. She was five feet, seven inches

The Wife of the Kenite, by Agatha Christie (epub/Kindle/pdf)

"The Wife of the Kenite" is an early suspense story originally published in 1923.