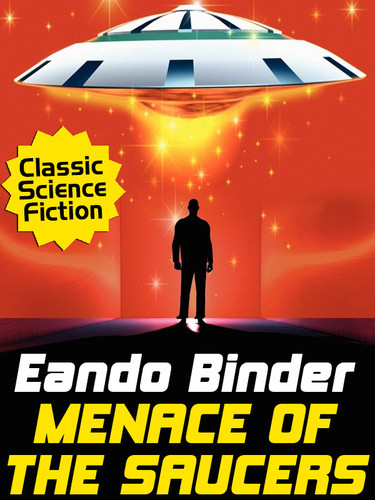 Smith was a writer of science fiction stories. Now, incredibly, he was witnessing the real thing.

Travelling silently at immense speed, its mirrored metal sides flashing in the sun, the saucer swooped in for a landing on Earht. Then, as Smith watched, another saucer appeared in the sky -- and the dogfight began! The saucers -- aliens from beyond known space -- were battling for control of the Earth. Something had to be done, even if Smith had no idea what it should be.

The trouble was -- no one believed him!

A trio in danger! Nat—a rugged frontiersman who lives by his own code in an untamed wilderness of ea

Night of the Saucers, by Eando Binder (epub/Kindle/pdf)

It was Earth's darkest hour. Weak, backward, prey to attack, it could only be saved by the Vigilante

Crime Gets a Head, by Talmage Powell (epub/Kindle/pdf)