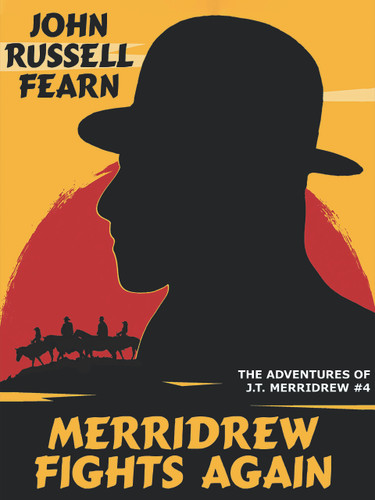 There never seems to be a moment’s peace in Double Peak. One hot afternoon the Mayor, in whom readers will recognize an old friend, Jenkinson Talbot Merridrew, known through all Arizona as the only man who tops his Western outfit with a bowler hat from Bond Street, is woken up by a stranger who has a startling offer for him. He represents a railroad corporation which wants to lay its tracks through Double Peak, and for the outright purchase of the township, he will pay a cool million—in gold.

The deal goes through, the gold is delivered, the town taken over by the railroad’s minions. But twelve hours later the bank is held up and the money stolen. Before an unshaven owl-hooter has time to say “Well, think uv that,” Mayor Merridrew and Sheriff Brad Wood are on the job again!

Lt. Marcus looks into a murder at a local hotel. The victim: one Mr. Draper. The cause: a slit throa