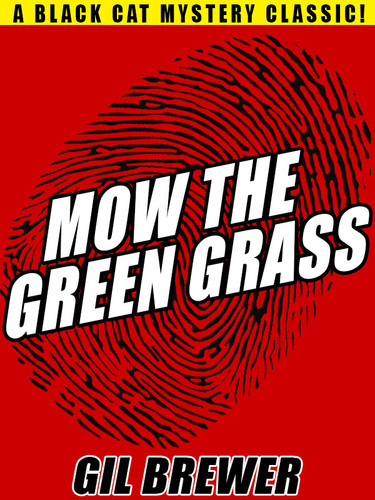 Harley had had it up to there with his neighbor borrowing things. The lawn mower was the straw that broke the camel's back.

"I grew up reading his work, admired it, was in fact influenced by it in certain small ways." -- Bill Pronzini

Gilbert "Gil" Brewer was an American novel and short story author.[1] He was born November 20, 1922 in Canandaigua, New York.[citation needed]

After leaving the army at the end of World War II, Brewer joined his family who had settled in St. Petersburg, Florida. There he met Verlaine in 1947 and married her soon after. Brewer started by writing serious novels, but soon turned to pulp paperbacks after a sale to Gold Medal Books in 1950. At one point, he had five books on the stands. Unwilling to promote himself, his career took a turn for the worse after a mental breakdown, and a long decline into alcoholism. Brewer died on January 9, 1983.

When Jim comes home early, he finds a man sneaking out the back door of his house. Of course, being

Prissy Baxter inherited a lot of money when her husband died. She keeps her sister, Liz, on a tight

Come Across, by Gil Brewer (epub/Kindle/pdf)

What makes a stalker? And what happens when a perfectly respectable man becomes obsessed with the gi

The Axe is Ready, by Gil Brewer (epub/Kindle/pdf)

With This Gun--, by Gil Brewer (epub/Kindle/pdf)

Danny's older brother, Tad, had a knack for showing up at just the right moment to stop him from doi