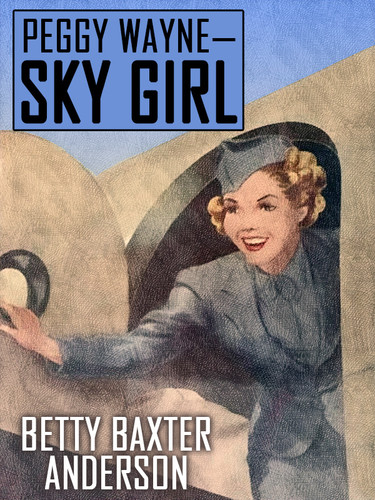 Peggy Wayne, a graduate nurse, applies for a position as airline hostess with Skylines, Inc. After passing the rigid tests and training period, she begins a thrilling new life in the air. Determined and ambitious, Peggy secretly learns to fly a plane herself.

Her knowledge of instruments and skills are tested when a hijacking attempt is made on the new Skylines Stratoliner while on a test run to New York. Trapped in the substratosphere, Peggy employs desperate measures to try to outwit the gangsters. Her own life, the survival of the crew, and the reputation of Skylines -- not to mention an important U.S. aviation secret -- are all at stake!

Betty Baxter Anderson (1908-1966) was an American author of books for young women. Born in Cornell, Iowa, she earned a Master of Arts from the University of San Diego College for Women. Her books were unusual for the time because she put the lead female characters in traditionally male type roles.

The Adventures of the Infallible Godahl, by Frederick Irving Anderson (epub/Kindle/pdf)

A series of tales about Godahl, the brilliant thief, and his escapades. In the tradition of Raffles

Women and naval secrets, trick messages and seaplanes--these were all about to figure in Bruce's lif

The Robbery in the Sleeping Car, by Cottrel Hoe (epub/Kindle/pdf) [Jennie Baxter #8]

Jennie seeks a letter that is vital to British and Russian relations.

Jennie finds herself aboard a train heading to Russia, with Lord Donal Stirling—who has now un

Over the course of the late summer and early autumn, six horrible deaths had occurred. Five men and

They were technically superior to mankind—they made humans look like savages. So what could po

The Robbery in the Sleeping Car, by Cottrel Hoe (epub/Kindle/pdf) [Jennie Baxter #8]

Jennie seeks a letter that is vital to British and Russian relations.

The Pearls of the Princess: Jennie Baxter #2, by Cottrel Hoe (epub/Kindle)

The second of Cottrel Hoe's tales of Jennie Baxter, a Victorial journalist-sleuth.