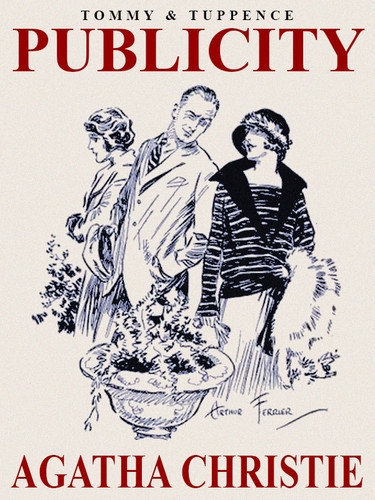 “Publicity,” the first in a series of 12 mystery stories featuring Tommy & Tuppence, was originally published in the The Sketch on September 24, 1924. These tales were billed “Tommy and Tuppence—A Detective Series by Agatha Christie” and would later be collected as Partners in Crime. “Publicity” would be split into two chapters and renamed “A Fairy in the Flat” (the first section) and “A Pot of Tea” (the second section). One additional story collected in Partners in Crime would be published four years later in Holly Leaves, the annual Christmas special of the Illustrated Sporting and Dramatic News (December 1928).

The conceit is simple: The Beresfords’ friend Mr Carter, who works for a government intelligence agency, arrives bearing a proposition for the adventurous duo. They are to take over The International Detective Agency, a recently cleaned-out spy stronghold, and pose as the owners so as to intercept any enemy messages coming through. In the meantime Tommy and Tuppence can take on cases as this detective agency, an opportunity that delights the young couple. They employ Albert, a young man introduced in The Secret Adversary, as their assistant at the agency.

The two tackle a series of cases, each mimicking the style of a famous fictional detective of the period, including Sherlock Holmes, Dr. Thorndyke, G.K. Chesterton, A.E.W. Mason, and even Christie's own Hercule Poirot (among others). “Publicity” is in the style of Malcolm Sage, Detective, by Herbert George Jenkins.

The Case of the Missing Will, by Agatha Christie (epub/Kindle/pdf)

Miss Violet Marsh was orphaned at fourteen years of age, when she went to live with her Uncle Andrew

In the latter days of the First World War, Poirot and Hastings meet Captain Vincent Lemesurier and h

Poirot investigates a jewel robbery. The theft occurred during a tea party, when a private safe was

The Wife of the Kenite, by Agatha Christie (epub/Kindle/pdf)

"The Wife of the Kenite" is an early suspense story originally published in 1923.

Irresponsible spender (and bank robber) Michael decides to pull an insurance scam on his car. He has

The Man Who Changed His Skin: A Comedy of Race Relations, by Harry Stephen Keeler (epub/Kindle/pdf)

It’s 1855, and with a war over slavery looming on the horizon, all bachelor Clark Shellcross w