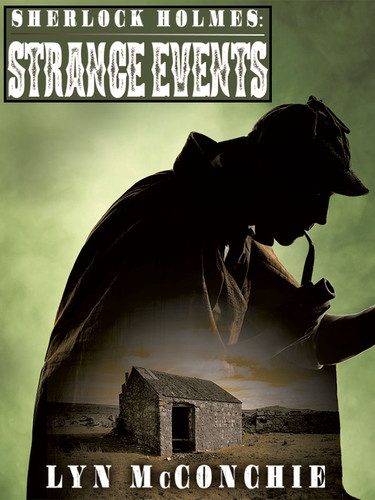 Now you see them, now you don’t … Where is the missing mother? And the omnibus with nine occupants? In Strange Events, Sherlock Holmes and John Watson return in two bizarre and chilling tales by the ingenious Lyn McConchie.

How can an omnibus with eight passengers and a driver simply vanish into thin air? The newspapers are full of speculation, and the police are clueless. Maurice Jepson’s wife Thelma was on the missing omnibus, and in desperation, he turns to Holmes and Watson. Their investigations lead them from the omnibus’s last route into unsavory gambling hells, where all is not as it seems. And when the body of one of the passengers is discovered in a vacant plot of land, the race is on to save the others!

Mrs. Martha Bewden left for a holiday, placing her legal affairs in the hands of her elder daughter, Heather. But two months have passed without a letter or any word, and her younger daughter Dorothy is growing concerned. Where is her mother? And why hasn’t she written or returned home? Holmes and Watson’s search for the missing woman carries them to the quaint villages of Cornwall and the bleak wilds of Dartmoor, where danger and horror await!

When Angela disappears, her husband begins to suspect foul play and summons Scotland Yard. Was it th

"Malcolm Sage had been a hot-shot intelligence agent for Britain's Division Z during the Great War,

Nick Carter #2: The Face at the Window, by Nicholas Carter (epub/Kindle/pdf)

Originally pubished September 21, 1912, here is the lead novel from issue #2 of the famous Nickel We