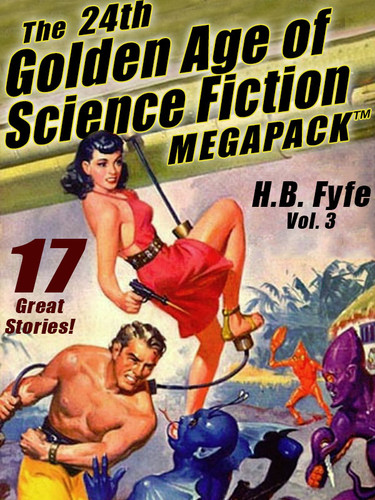 The Golden Age of Science Fiction MEGAPACK™ Series focuses on unjustly forgotten science fiction writers from the 1960s and before. Horace B. Fyfe (1918-1997) was one. An engineer by trade, he also wrong a long string of popular science fiction and fantasy stories. He published extensively in genre magazines from his first appearance in Astounding (February 1940) until his last publication in Analog (January 1967). Sadly, Alzheimer’s cut short his career, but his family stepped in to save his files, including more than 90 unpublished stories and an unpublished historical novel. Most of his unpublished works is in other genres, such as suspense or mainstream, but a few are lost gems, and we are delighted to present two previously unpublished tales here. Included in this volume are:

H.B. Fyfe published dozens of science fiction stories during his three-decade career as a writer. In

The Terror Out of Space, by Leigh Brackett (epub/Kindle)

An eerie story of a silver land beneath the black Venusian seas. A grim tale of brooding terror whir

A World is Born, by Leigh Brackett (epub/Kindle)

The first ripples of blue fire touched Dio's men. Bolts of it fastened on gun-butts, and knuckles. M

There were twenty or twenty-five of them, overalled men, and women in homespun dresses and calico su

Pistols For Nobody, by Manly Wade Wellman (epub/Kindle)

Squire Huckleroy told the jury that Clavering and Tebow, both law scholars together, hadn’t be