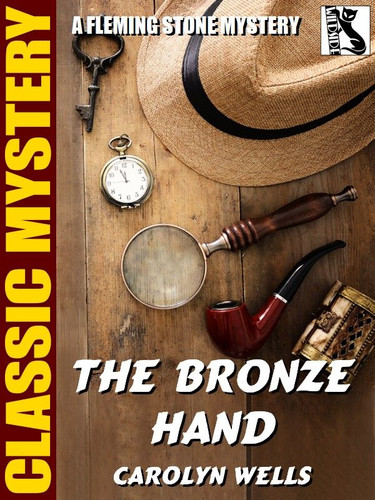 A shady and dissolute millionare is murdered aboard a liner bound for Liverpool, his head battered in by blows of the sinister bronze hand, modeled from Rodin’s original. Who killed Oily Cox? What part did the bronze hand play in the murder? What was the motive? Such are the questions which Fleming Stone, enlisted as a disguised passenger on shipboard, sets out to answer in his clever, inimitable manner.

Naturally excitement runs high as clue after clue is unearthed and the finger of suspicion points first to one and then another of the various passengers on the steamer. The heroine, an exclusive, self-reliant American girl enveloped in an atmosphere of mystery, is chiefly suspected because of circumstantial evidence.

The story is closely knit together with many surprising and unlooked for denouements which keep the reader’s interest at high pitch until the very end when the guilty parties are tracked to their doom.

A popular playwright is found stabbed with his own pen, made from a medieval dagger. Unconscious on

There are crooks, and other crooks—ranging from the lowly dip who lifts the contente of milady

We Are the Dead, by Henry Kuttner (epub/Kindle)

A poignant, brief tale of a weird experience in Arlington Cemetery by a master of the weird tale.

Dawn of the Demi-Gods, by Raymond Z. Gallun (epub/Kindle)

As unheralded as ghosts, but as significant as a new dawn of history, there came to Earth from dista

The Secret of Chimneys, by Agatha Christie (epub/Kindle)

At the request of George Lomax, Lord Caterham reluctantly agrees to host a weekend party at his home

The hero is Hugh Dillon, who is taking criminal practice in order to get a foothold; the heroine is

The latest Barb Goffman Presents is a Christmas-themed mystery! Steve Hockensmith is the author of s

James Hendryx (1880-1963) was a Minnesota-born American author of western fiction. He worked as a jo

A brief, poetic story about an alien city—and a metallic doom! (You can tell Kuttner was readi