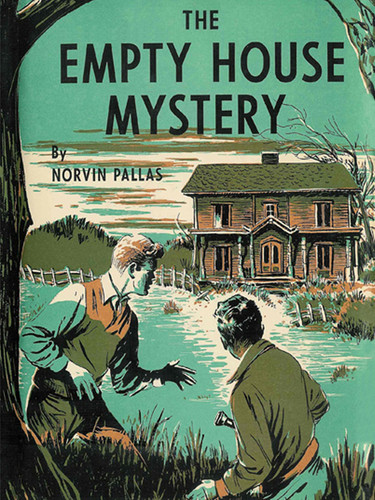 This fifth mystery by Norvin Pallas combines a real puzzle with the story of Ted Wilford’s strenuous efforts to get out the bi-weeklv Town Crier while the editor is ill. Ted and his friend. Nelson, who have just graduated from high school, devote part of their pre-college summer to finding the thief of a set of plans for the new state thruway. Before they have solved this problem, they must discover how a telephone can ring in an empty house with no risible connection between the house and a telephone wire.

It all began for Ted one day in the office of The Town Crier when a man came in to advertise in the Lost and Found column for a missing folder with a peculiar zipper. Later when it was brought to the office by the finder, Ted, carried away by his desire to demonstrate the splendid service offered by the paper, personally left the folder at the advertiser’s address. It turned out to be an empty house, but Ted had reasons for thinking it was logical to leave it there. However, later when he discovered that the folder really contained plans stolen from the highway department, Ted knew he must find it as quickly as possible.

The quest leads Nelson and him into adventures in several empty houses, into an investigation of the mysteriously ringing telephones, and, finally, to a completely different solution than he or the reader had anticipated. The daily doings in a small-town newspaper office plus a well-plotted story make another satisfying Ted Wilford mystery, both for his fans and those who are meeting Ted for the first time.

Ted thinks teenagers are getting a bad rap when they are blamed for vandalism. But when summer comes

When The Town Crier, the semi-weekly newspaper for which Ted Wilford writes and Nelson Morgan takes

#15 in the Ted Wilford series. The disappearance of a package containing rare plant cuttings leads

Ted Wilford Mystery #6. Not long before Ted Wilford leaves for college, he is asked by the Town Cri

Ronald Wilford, cub reporter on the Cleveland Star, is asked by his editor to find a missing colleag

Think of Jasper Shrig as a 19th century Sherlock Holmes. Thrilling events follow each other with the

The Horror Undying, by Many Wade Wellman (epub/Kindle/pdf)

He found the old book under the floorboards of a cabin. Was it a trashy dime novel—or somethin

The Courts of Jamshyd, by Robert F. Young (epub/Kindle/pdf)

Ryan is a member of a tribe of post-apocalyptic primitives. Each night, the tribe chants about how t

A man survives a terrible plague, with a new Force in his mind which gives him courage and enables h