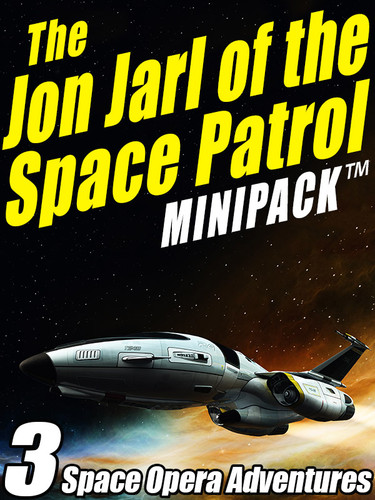 View Details
Starting with the February, 1946 issue, every issue of the comic book Captain Marvel Adventures included a 2-page short story by "Eando Binder" (Otto O. Binder). All featured Lt. Jon Jarl of the Space Patrol. These juvenile space operas -- designed to appeal to kids -- featured daring-do by a two-fisted young member of the Space Patrol. In a solar system where seemingly every planet and moon can support life and the asteroid belt harbors numerous space pirates and criminals, Jon Jarl always seems to save the day.
If you've seen the early TV adventures of Captain Video and His Video Rangers, Space Patrol, or Tom Corbett, Space Cadet-which were clearly influenced by Binder's writing (as well as the shared universe of "space opera" that had been developed in Amazing Stories magazine under editor Ray Palmer) -- you will know what you're in for...a ride into the Wild West of outer space, where physics and logic never get in the way of a good story!
This MINIPACK features 3 of the classic tales.
×

Smith was a writer of science fiction stories. Now, incredibly, he was witnessing the real thing. Tr

Night of the Saucers, by Eando Binder (epub/Kindle/pdf)

It was Earth's darkest hour. Weak, backward, prey to attack, it could only be saved by the Vigilante

Jake Kilgore was defending the son of the territory's richest and most powerful man. The charge -- M

When their house appears to be haunted, a young couple goes to extraordinary means to solve the myst