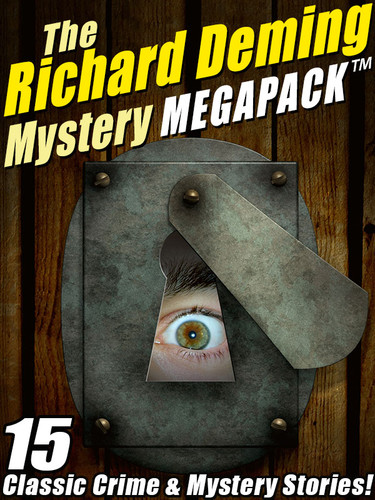 Richard Deming (1915-1983) wrote prolifically for magazines (more than 200 short stories) as well as for major book publishers (more than two dozen novels, ranging from original crime novels to media tie-ins (Dragnet and The Mod Squad) to even a pseudonymous nautical series involving submarines. He was a meticulous professional who never disappointed readers.

Included here are 15 of his best crime tales, including:

THE ART OF DEDUCTION
THE CLOCK IS CUCKOO
SAY IT WITH FLOWERS
STOLEN GOODS
MR. OLEM’S SECRET
CHEERS
HE’LL KILL YOU
A GIRL MUST BE PRACTICAL
ACTING JOB
BLACK BELT
A PUTTING AWAY OF TOYS
DAN AND THE DEATH-CELL BLUFF
HOUSEBOAT
NICE GUY
A GOOD FRIEND
THIS IS MY NIGHT (Novel Sample)
DRAGNET: THE CASE OF THE COURTEOUS KILLER (Novel Sample)
PACIFIC STANDOFF (Novel Sample)

Available in ePub, Kindle (.mobi) and .pdf. This time we present for your reading pleasure a select