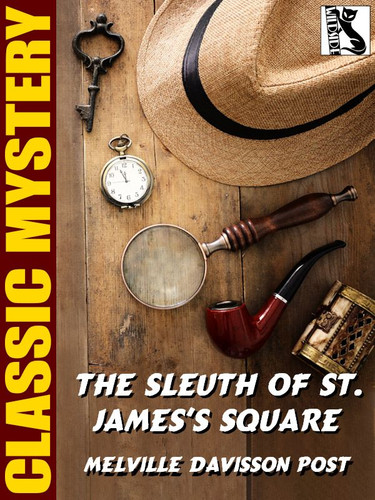 Once considered by many to be the greatest American mystery writer of all time, Melville Davisson Post (1869-1930) has begun to fall into undeserved obscurity in the near century since his death. The Sleuth of St. James’s Square, first published as a book in 1920, aptly demonstrates his strengths, and it makes a good place to start for anyone encountering Post’s work for the first time. This volumes includes 16 mystery stories, each connected—if sometimes tangentially—to Sir Henry Marquis, head of the Criminal Investigation Department of Scotland Yard, who is called upon to solve some of the strangest and most puzzling cases in Britain. It starts with a locked-room mystery and ends in Scotland, at a house by a Loch where more is going on than meets the eye. A first-rate collection.

Lady Sleuths have long been a mainstay of the mystery field. Agatha Christie's Miss Marple is, surel

The Mystery of the Pilgrim Trading Post, by Anne Molloy (epub/Kindle/pdf)

3 postmen -- all dead. When John J. Mallone sticks his nose into the case, he gets more than he barg

Walker of the Secret Service, by Melville Davisson Post (epub/Kindle)

Ralf Dale of the Interplanetary Police could scarcely believe it when his girlfriend confessed, &ldq

We are fortunate to have Barb Goffman, one of the most celebrated short story authors and editors of

To remain on Mars meant death from agonizing space-sickness, but Earth-surgery lay days of flight aw