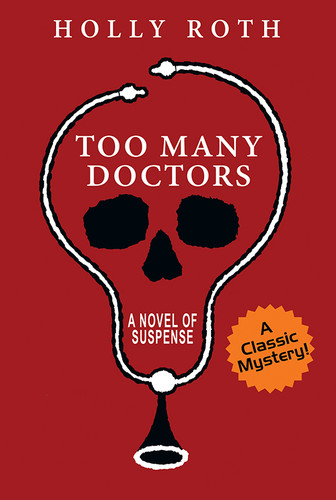 View Details
NOTE: This image-based ebook is offered in both EPUB and Kindle Fixed format (for display on tablets and computers, not phones).
The M.S. Tilburg, a small German passenger ship on its way to the Far East, has had a pleasantly uneventful trip until she stops at Southampton and takes on a number of passengers. Shortly thereafter, the M.S. Tilburg becomes a hell ship.

The first victim is an attractive young woman who falls down stairs-or was she pushed?-and is then attacked next day with a razor blade. Luckily for somebody, she is suffering from amnesia as a result of the fall. Almost immediately thereafter another woman, who has been boasting about the acuteness of her senses, is thrown into the empty swimming pool, and is quite evidently lying about who did it.

Meanwhile, a doctor in London is murdered, and the police fish a body out of the Thames, also murdered, also a doctor. Back on the ship, an investigation discloses the fact that the ship's former doctor had died at sea before reaching Southampton-seemingly from a bout of indigestion, but actually from poison.

These are not unrelated events. How they are tied together makes for a constantly exciting, baffling, and suspenseful novel by a 20th Century master of the mystery genre!

Originally published in WEIRD TALES magazine in the 1930s, here is the complete Doctor Satan series

"An astonishing book: don’t miss it." --BOSTON GLOBE In the treacherous maze of post-war Berl

It's Always Too Late, by Gil Brewer (epub/Kindle/pdf)

Harvey Caldwell's wife, Millie, is constantly nagging him to make more money. She never dreamed his

The Horror Undying, by Many Wade Wellman (epub/Kindle/pdf)

He found the old book under the floorboards of a cabin. Was it a trashy dime novel—or somethin

Who murdered the man found roped to the gibbet on Gallows Tree Point? Who stole Miss Ellingham’

A runic inscription on a Norse altar ring. A falsely convicted father serving a life sentence. A son

Classic science fiction from the creator of the Dumarest saga, this early tale by E.C. Tubb has not