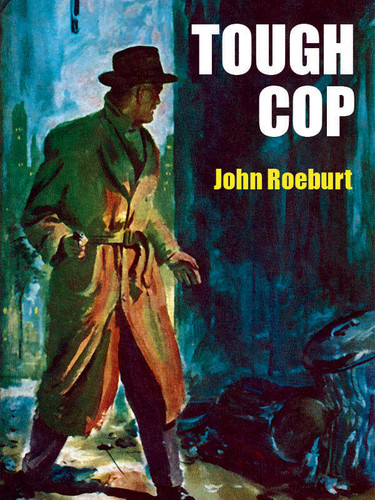 "The crooks, the grafters, all of New York's underworld kept telling themselves that they never had it so good as they would now, with Johnny Devereaux retiring from the force after 21 years. Devereaux was a tough cop, tough to encounter and impossible to bluff.

Devereaux was doing a little chortling of his own. He was still young enough to enjoy life; he wanted to read some books, take a little trip, fulfill a few dreams. He was sitting in his car that evening, thinking about his beautiful future, when his beautiful future -- in the form of Jennifer Phillips -- opened the door of the car, sat down, and said, ""Please hurry!""

So she was twenty years his junior -- so what? She was very, very beautiful, she was in trouble, and Devereaux was ripe for romance. Or call it an automatic reflex, if you prefer to think of him as a tough cop; say he had been on the force so long that he responded mechanically to a try for assistance.

""Roeburt returned in his fourth to the tough-guy genre and a character modeled on the later Bogart."" -- Mike Nevins"

About Face: A Johnny Liddell Mystery, by Frank Kane (epub/Kindle/pdf)

She was an alcoholic blonde with a load of hot diamonds—a set-up for murder on the rocks. And

A House in Naples, by Peter Rabe (epub/Kindle/pdf)

Charley's Rope was about frayed out. The caribinieri were after him, he had a bullet in his hip and

The Day They Had a War, by Richard Wilson (epub/Kindle/pdf)

What will you be doing the day the world ends?

If vampires really exist, there has to be a scientific explanation. Dr. Schwick decided to find dthe

Short Things is a collection of never-before-published stories based on John W. Campbell’s cla

Worse things can happen on the ocean than watching your ship sink from a lifeboat. There are monster