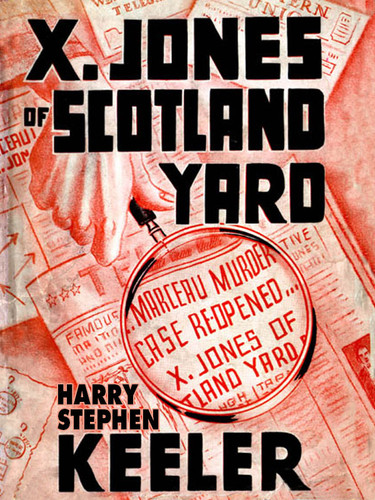 One of Keeler's best, this is the second half of the notorious Marceau case, where a strangler baby dangling from an autogyro may have done the deed. Written in 1935 at the peak of Keeler's powers.

Xenius Jones, Chief Inspector of Scotland Yard, gave the exact date he would reveal the details of the infamous André Marceau murder. Then Alec Snide, an American reporter, broke the case before he did! But Jones insists that Snide is 100% wrong—and he’s got the 4-dimensional proof of it! In the second “dossier novel” of this remarkable murder case, Harry Stephen Keeler once again proves that no one could handle a complicated plot as he could.

Note for the culturally sensitive: Most of Harry Stephen Keeler's works are not politically correct by contemporary standards. Please keep in mind the time in which it was written as you read it.

The Man with the Crimson Box, by Harry Stephen Keeler (epub/Kindle/pdf)

A man stood on a street­corner with a crimson hatbox in his hand. An archbishop approached him and a

Nobody knew the trouble she'd been in -- until it caught up with her. And then it was murder! "Mac

Trouble struck the schooner Griselda at 9:40 on an April evening. It was not the fault of the weathe