You'll Get Yours, by William Ard (writing as Thomas Wills) (epub/Kindle/pdf) 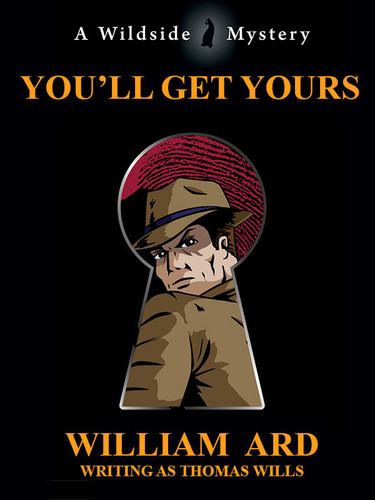 You'll Get Yours, by William Ard (writing as Thomas Wills) (epub/Kindle/pdf)

I had just begun taking off my jacket when the door quietly opened and two men slipped swiftly into the room.

One was Frankie. The other I was seeing for te first time and not liking what I saw. Both were armed. Frankie had changed his his toy for a mansized .38, which he held in his gloved right hand.

No one spoke a word. The stranger tilted his gun toward the center of my face. Frankie swung his at the girl on the bed, planted his feet solidly, and fired five times into her body.

Frankie dropped the .38 to the floor and the two of them backed out of the room. The door was quietly closed.

I walked over quickly, crouched down, looked at the gun.

"Thomas Wills" was the pseudonym of William Ard (1922-1960), best known as the creator of the Danny Fontaine, Timothy Dane, and Lou Largo series.

When a strange container is found in a busy London shipping yard, its contents point to murder. The

The fugitive was Cape Sloan (or so he called himself), late of Yuma Penitentiary. He was young, but

A Change of Heart, by Talmage Powell (epub/Kindle/pdf)

The plan to stop his rich aunt's heart transplant proceeded in a way both ironic and deadly...

He was a tall, cleanly attractive young man, the kind you'd like to have for a neighbor. Press the w

KISSES OF DEATH The first night with her led to a file of blackmail photographs worth a fortune. K

And Mongo Was His Name-O, by A.R. Morlan (epub/Kindle/pdf)

Sometimes it's more than mere luck that brings cats and humans together...

Once Upon a Time, by Russ Winterbotham (epub/Kindle/pdf)

The time machine was a menace to civilization. It had to be destroyed! But how can the future destro

Edward Phillips Oppenheim (1866 – 1946) was an English novelist, in his lifetime a major and s