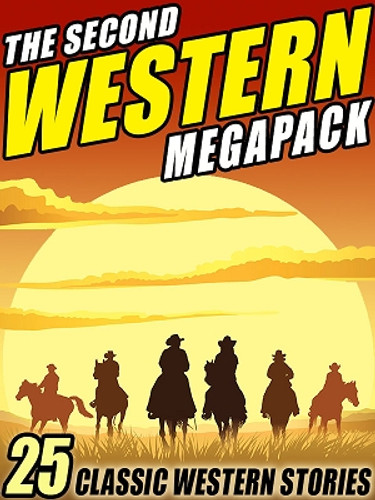 The Second Western MEGAPACK™ presents a wide-ranging selection of western tales sure to get your pulse racing. Here are action tales of the old west by masters such as Zane Grey, Ed Earl Repp, Robert E. Howard, Clarence E. Mulford, Max Brand -- and many more. More than 2,000 pages of great reading!

QUICK PAY FOR MAVERICK MEN, by Ed Earl Repp
TOM'S MONEY, by Harriet Prescott Spofford
WHILE SMOKE ROLLED, by Robert E. Howard
THE AFFAIR AT GROVER STATION, by Willa Cather
THE OUTLAW PILOT, by Stephen Payne
READY FOR A COFFIN, by Gene Austin
BULLDOG CARNEY, by W. A. Fraser
DUST, by Marcet and Emanuel Haldeman-Julius
THE JIMMYJOHN BOSS, by Owen Wister
THE APACHE MOUNTAIN WAR, by Robert E. Howard
ABOVE THE LAW, by Max Brand
WITH GUTS, GUN, AND SCALPEL, by Archie Joscelyn
THE END OF THE TRAIL, by Clarence E. Mulford
THE WILD-HORSE HUNTER, by Zane Grey
THE HONK-HONK BREED, by Stewart Edward White
THE TEXAN SCOUTS, by Joseph A. Altsheler
THE ROAD TO BEAR CREEK, by Robert E. Howard
A KINSMAN OF RED CLOUD, by Owen Wister
NO REPORT, by S. Omar Barke
THE LAST OF THE PLAINSMEN, by Zane Grey
GUNMAN'S RECKONING, by Max Brand
LITTLE BIG HORN MEDICINE, by Owen Wister
THE LONE RANGER RIDES, by Fran Striker
MAN SIZE, by William MacLeod Raine
COLUMBIA AND THE COWBOY, by Alice MacGowan

And don't forget to search this ebook store for "Wildside MEGAPACK™" to see all the entries in the MEGAPACK™ series -- including volumes of science fiction, fantasy, horror, mystery, westerns, classics, and much, much more!