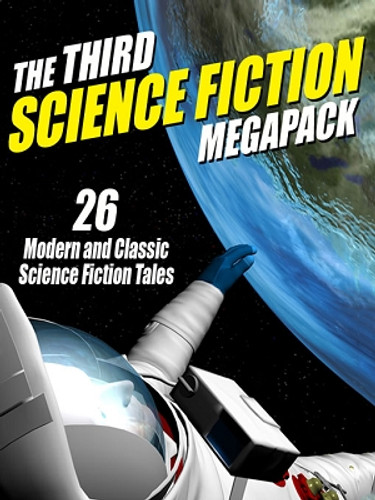 The third volume in the Science Fiction MEGAPACK™ series collection 26 tales of high adventure through other worlds and times, including a complete novel by H. Beam Piper! Included in this volume are:

“The Man Who Made Friends with Electricity,” by Fritz Leiber
“Time Bum,” by C.M. Kornbluth
“The Human Equations,” by Dave Creek
“The Gun,” by Philip K. Dick
“Not Stupid Enough,” by George H. Scithers
“Jackpot,” by E.C. Tubb
“The Killing Streets,” by Colin Harvey
“Moon Dive,” by Sydney J. Bounds
“Charon’s Curse,” by John Glasby
“The Hunted Heroes,” by Robert Silverberg
“Night of the Squealers,” by Michael McCarty and Mark McLaughlin
“Chaos,” by John Russell Fearn
“And Happiness Everlasting,” by Gerald Warfield
“The 7th Order,” by Jerry Sohl
“Monkey on his Back,” by Charles V. De Vet
“The Calm Man,” by Frank Belknap Long
“Alien Still Life,” by John Gregory Betancourt
“A Question of Courage,” by J. F. Bone
“Angels and Moths” by Costi Gurgu
“Second Landing,” by Murray Leinster
“The Einstein-Rosen Hunter-Gatherer Society,” by George S. Walker
“Wind,” by Charles L. Fontenay
“Star Mother,” by Robert F. Young
“The Sky Is Falling,” by Lester Del Rey

And don't forget to search this ebook store for "MEGAPACK™" to see other  volumes in the series, from science fiction to ghost stories to mysteries...and many more!