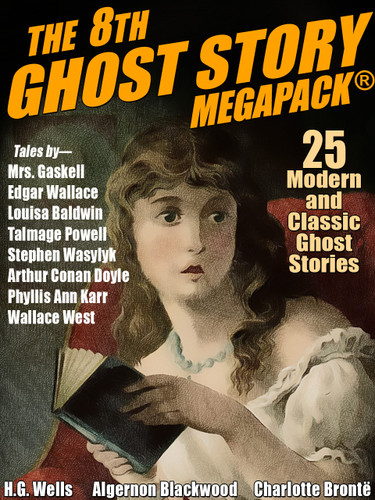 We love ghost stories here at Wildside Press—witness the fact that we have now now reached our eighth volume in this series. Very few other genres are so versatile and enduring as tales of the supernatural. Ghosts can (and have) appeared in literature for thousands of years, in all countries and continents (and times past, present, and future) throughout the world. But the Victorian era particularly seemed to embrace ghost stories, and that’s when Christmas ghost tales became not just a staple of literature, but a requirement. Seemingly all British fiction magazines (and many newspapers) had to publish at least one ghostly tale in the month of December.

Proving that the ghost story tradition is strong to the present day, we have an original story from Phyllis Ann Karr (author of the Frostflower and Thorn series), plus two drawn from Alfred Hitchcock’s Mystery Magazine (which strayed a little more into the fantastic and horrific in the 1960s that it does today), plus another modern story by Wallace West, who is best known as a science fiction writer. Good stuff.

Here is the complete lineup:

And don't forget to check out our other volumes in the MEGAPACK® series—there are hundreds of them! Search your favorite ebook store for "Wildside Press MEGAPACK" to find the complete list.

Welcome to The Seventh Ghost Story MEGAPACK®!! Once more we have a wide-ranging assortment of supern

Welcome to Black Cat Weekly #32. This issue, we have more original stories than ever before. Editors

Welcome to Black Cat Weekly #31. This time, the lineup includes pretty much everything fans look for

Welcome to Black Cat Weekly #33. The astute will notice that this issue is being released early&mdas

Here is the 34th issue of Black Cat Weekly, packed with more than 500 pages of great reading, w

Black Cat Weekly #11 is now available! Mysteries: “This Will Slay You,” by Dale Clark [