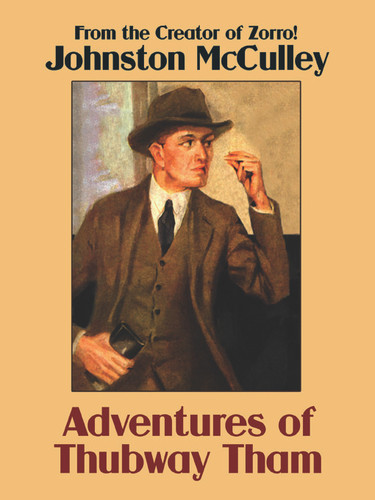 Pulp writer Johnston McCulley (1993-1938) was the author of hundreds of short stories and novels, published in pulp magazines under his own name and a plethora of pseudonyms. His most famous creation is, without a doubt, the masked swordsman Zorro, made popular by radio, movie, and television adaptations. But before Zorro hit it big, McCulley tried out dozens of different heroes and antiheroes: Black Star, the Avenging Twins, the Man in Purple, the Green Ghost, the Mongoose, Richard Hughes-Railroad Detective, the Spider, the Thunderbolt, the Crimson Clown...the list goes on and on. And it includes a good-hearted pickpocket with a lisp named "Thubway Tham," pursued by Detective Craddock of the New York Police Department.

And don't miss Tales of Thubway Tham, the companion volume!

Thubway Tham is a small, short-tempered gnome of a man, a professional pickpocket with an annoying l

The masked woman called herself Madame Madcap, and she gathered a gang of cutthroats determined to l

All for the Love of a Lady: A Col. Primrose Mystery, by Zenith Brown (writing as Leslie Ford) (epub/Kindle/pdf)

MONEY -- D. J. Durbin had the price of a lavish mansion and a beautiful wife. But he couldn’t

A Stuff Driscoll Florida Gold Coast Mystery! The story of two stepbrothers and the $3 million that

And Kill Once More, by Al Fray (epub/Kindle/pdf)

In one jump, Marty Bowman made it from lifeguard to bodyguard -- and what a body! Her name was Kate.

A Bullet for Cinderella, by John D. MacDonald (epub/Kindle/pdf)