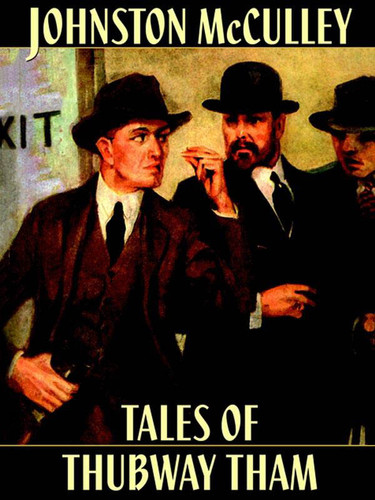 Thubway Tham is a small, short-tempered gnome of a man, a professional pickpocket with an annoying lisp. But he is no mere thief . . . he is the king of his chosen profession, a master "dip" who works only in the subways of New York City. Like all such villains, he faces a cunning adversary in Police Detective Craddock, who is always half a pace behind. Craddock has sworn to put Tham behind bars, where he belongs. But Tham is clever enough to always remain one step ahead of Craddock and everyone else. Despite being a criminal, Tham always comes off well: the people whom he relieves of their wallets are often deserving of it, and he has a tendency to take on other, much worse crooks to give them their just desserts. And, of course, there are scoundrels aplenty in his world: a rival pickpocket who moves in on his turf in "Thubway Tham's Baggage Check;" Shifty Shane, the holdup man, who calls Tham a coward because he doesn't use a gun; and Mr. Clackworthy, a slick grifter from Chicago, who looks down on dips as the lowest of thieves.

Call him an early antihero. Tham endears himself to readers because he has a moral compass. He knows his place is in the gutter of the world, but that doesn't mean he can't strive to better himself -- or others.

This volume collects 10 stories and includes an introduction by John Gregory Betancourt. And don't miss the companion volume — ADVENTURES OF THUBWAY THAM!

Pulp writer Johnston McCulley (1993-1938) was the author of hundreds of short stories and novels, pu

The masked woman called herself Madame Madcap, and she gathered a gang of cutthroats determined to l

Sting of the Scorpion, by Richard B. Sale (epub/Kindle/pdf)

Silent, body fingers of Death flung a challenge into the teeth of Detective Marty Trent. Before his

Cyril M. Kornbluth (1923–1958) was an American science fiction author and a notable member of

John Keith Laumer (1925–1993) was an American science fiction author. Prior to becoming a full