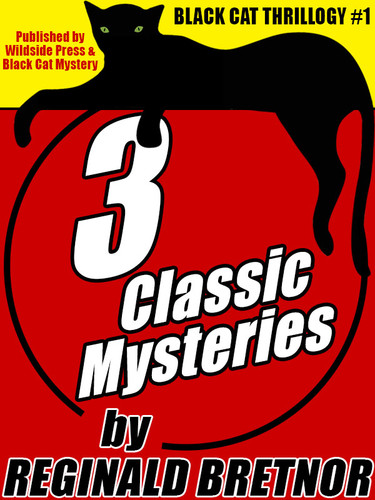 Welcome to the first volume of The Black Cat Mystery Community’s "Thrillogy" series, celebrating classic mystery short stories. This time we focus on the work of Reginald Bretnor (1911-1992). Included are:

PAPER TIGER
THE MURDERERS' CIRCLE
THE PHOTOGRAPHY OF THE DEAREST DEFUNCT

Reg was born Alfred Reginald Kahn in Vladivostok, Siberia. He was the son of a Latvian Jewish banker and an English governess. The family moved to Japan in 1917, then to San Diego, California, in 1920. Bretnor, whose name was taken from the maiden name of his maternal grandmother and who many acquaintances thought to be the perfect English gentleman, never left the United States in the 72 years he lived here and did not once set foot in Great Britain.

He is most widely known in the science fiction field for his humorous "Feghoot" pun stories featuring time-traveler Ferdinand Feghoot. He also published a handful of science fiction novels and a single mystery novel (A Killing in Swords) in addition to more than a hundred short stories in both the mystery and science fiction genres. In addition to fiction, he wrote extensively on cats and swords (he was an expert on Japanese swords), and both elements feature in many of his works.

Donoghan was a brute of a man, and he treated all of his women—even his wife. But when he took up wi