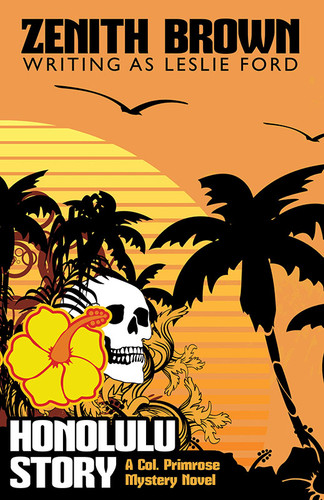 This new “Col. Primrose Mystery Novel” might have well been called "The New Mrs. Latham Mystery Novel," because Mrs. Latham plays almost as important a part in it as the Colonel. The scene is Hawaii, and practically all of the action takes place in and around a house high up on the mountainside above Honolulu. It is the story of a black-sheep American, whose family had lived in Hawaii for generations, but who went to Japan and, sometime after Pearl Harbor, decided to come back and play traitor to his country.

Mrs. Latham is present when he makes his first appearance in his family’s house, she is present when his murdered body is discovered -- and disposed of -- and she is deeply involved in the circumstances that lead up to the second murder, that of a beautiful Hawaiian- American girl who is engaged to marry an American aviator. In fact, Mrs. Latham this time is so much involved that Colonel Primrose accuses her of completely spoiling an air-tight case for him and calls her a nitwit. Shortly after that, for the first time in these stories, he proposes to Mrs. Latham. For the answer, reader, you may write your own ticket!

"Miss Ford at her best." -- The Hartford Courant

By the Watchman's Clock, by Zenith Brown (writing as Leslie Ford) (epub/Kindle/pdf)

Slowly I turned to face the hall and the doorway. I waited in an agony of suspense. The great house

Hell Has No Fury, by Fletcher Flora (epub/Kindle/pdf)

A Black Cat Pulp Classic!   Lawyer Solomon Burr has a new client . . . and it's an old friend