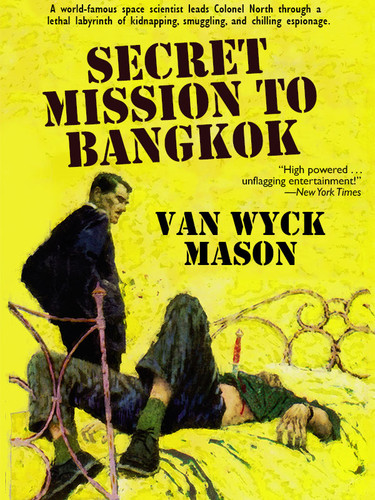 THE REDS WOULD GIVE A SPIRE OFF THE KREMLIN to lay hands on Dr. Hans Bracht, America's foremost missile genius. And here he was on a Bangkok-bound plane with only G-2's Colonel North to guard him. The plane's passenger list made North sweat: MARY HOLLBERG, a shapely Fraulein who said she was a concert pianist but obviously wasn’t; CHU HOONG, multimillionaire manufacturer of Dragon’s Tooth Elixir; LITA NALINE, an exotic, sloe-eyed film star who developed a sudden affection for Colonel North; BORIS SALENKOV, who resembled Stalin in more ways than his mustache; LEX ROSE, a Hollywood executive and once a card-carrying Commie. Looking at them, Colonel North knew that murder would be the least of his troubles.