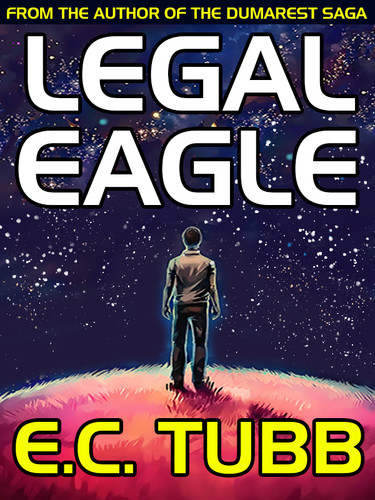 The law-books were thick, comprehensive—and all written in Lurarian. Armstrong cursed as he tried to wade through them, and then gave up in disgust. His speaking knowledge of the language was excellent; he could even write and read it sufficient for normal purposes, but since when have legal books been written for the understanding of the common man? And with legal phraseology being what it was, he dared take no chances on hit-or-miss translations. Not when his entire future could depend on the exact meaning of a word.

Armstrong was a man of sense; he went out and hired a professional. The lawyer, or the Lurarian equivalent, was a battle-scarred veteran of the courts who’d had the sense to quit before his slowing reflexes caught up with him.

“It’s quite simple,” he said. “The basic rule is that all disputes shall be tried by combat, the winner proving the justice of his case by his victory.”

Going to space—going Upstairs—was everyone's dream. But only the best made it. Only some

Radford threw a folder on the firing-bench. “All right,” he said before the agent could

The first Black Cat Mystery Magazine of 2021 presents 7 compelling original tales, plus a classic re

A golf tan doesn't belong on a corpse, even one in an upscale Greenwich living room. This golfer get

Laughter Out of Space, by John Russell Fearn (epub/Kindle)

It was a plague of laughter fits—fits that left the sufferers dead. But what was the origin? A

Do Unto Others, by Broderick, Damien (epub/Kindle)