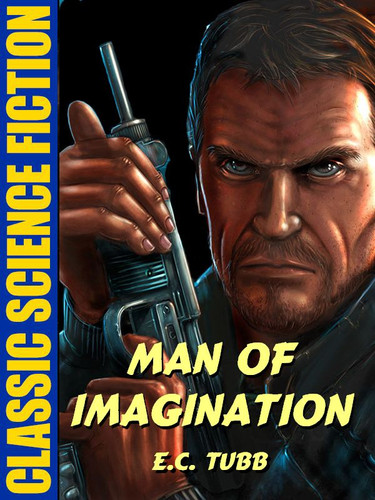 The green fleck on the radar screen hadn’t altered in size for three days now and Lieutenant Polton was getting discouraged.

“I can’t understand it,” he grumbled. “Police craft are supposed to be able to overtake anything in space. How come that Broman can hold his lead?”

“He’s in a souped-up sports model.” Captain Wheeland didn’t appear to be worried. “He torched his jets when he spotted us.” He leaned back in his chair. “Don’t fret, he’ll get what’s coming to him.

” “Maybe.” Polton glowered at the position screen showing the swirling kaleidoscope of hyper-space. He was younger than Wheeland and took it as a personal challenge that Broman should have eluded capture for so long. He said so. Wheeland shrugged.

“Broman was clever,” he admitted, “but not clever enough. He had the imagination to commit the crime but not enough to foresee the inevitable result. That’s the trouble with criminals,” he went on conversationally. “They know before they commit the crime that we’ll catch up with them but they go ahead just the same. Even at that Broman was more clever than most. He had a get-away ship planned and ready.”

Going to space—going Upstairs—was everyone's dream. But only the best made it. Only some

The law-books were thick, comprehensive—and all written in Lurarian. Armstrong cursed as he tr

Radford threw a folder on the firing-bench. “All right,” he said before the agent could

A jail cell held the answer to the murder of Vic’s policeman father, and the price of learning

To remain on Mars meant death from agonizing space-sickness, but Earth-surgery lay days of flight aw

Walker of the Secret Service, by Melville Davisson Post (epub/Kindle)

Captain Walker, chief of the United States Secret Service, pursued a life of crime as a youth, befor

We are fortunate to have Barb Goffman, one of the most celebrated short story authors and editors of