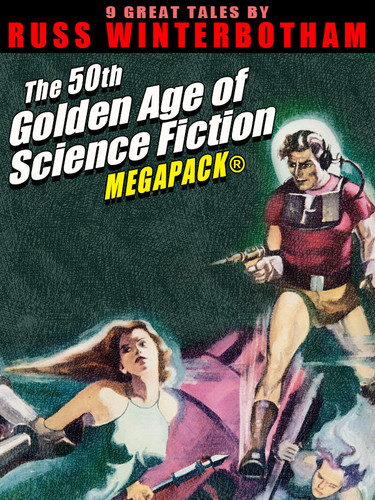 Russell Robert Winterbotham (1904-1971)—who wrote as both R.R. Winterbotham and Russ Winterbotham (as well as the pseudonyms “J. Harvey Bond” for mysteries and “Franklin Hadley”)—began publishing in the late 1920s, though his didn’t make his science fiction debut until 1935, when “The Star that Would not Behave” appeared in Astounding. He published prolifically in most of the top magazines of the day, before settling into an action-adventure niche. From the fiction magazines, he moved into comics (writing for Red Ryder), comic strips (he penned “Chris Welkin, Planeteer” from its start in 1951 into the 1960s), and Big Little books for the Whitman Publishing Company (he wrote at least 60, including the Maximo the Amazing Superman series). All the while, he maintained his full-time job as fiction editor for Scripps-Howard NEA news service. In those days, newspapers published fiction, and many had a weekly insert that included full-length novels.

Although well regarded, his novels—which appeared under pseudonyms—failed to attract much fan attention, and he is largely forgotten today. Nevertheless, modern readers will enjoy his better-than-average writing and fun, action-adventure plots—often with clever twists.

ORIDIN’S FORMULA
THE MINUS WOMAN
DEAD MAN’S PLANET
THE THOUGHT-MEN OF MERCURY
THE MONSTER THAT THREATENED THE UNIVERSE
LONESOME HEARTS
A LITTLE KNOWLEDGE
THE WHISPERING SPHERES
GENESIS!

It was a Gypsy world, built of space flotsam, peopled with the few free races of the Solar System. R

The Crime Club, by A. Holt-White (epub/Kindle)

This classic Victorian mystery was originally published in 1910.