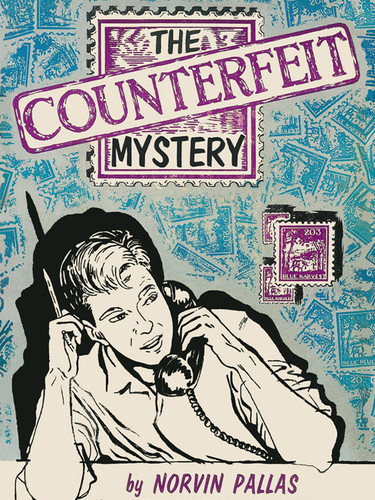 Not long before Ted Wilford leaves for college, he is asked by the Town Crier’s editor to keep an eye on the salesman who is setting up a trading stamp plan in their town. The editor has no particular reason to suspect anything is wrong, but as a sponsor of the plan, he feels that Ted, with his extensive experience during his high-school days on the paper, can keep a careful eye on the whole set-up if he works in the company’s local sales office for a few weeks.

At first Ted thought the stamp plan was a splendid idea for the town, the stores, and the customers. But several unexplained incidents puzzled him, and almost at once he found himself in the midst of a full-fledged mystery. With the help of his newspaper editor, Ted uncovers a fascinating scheme for counterfeiting the trading stamps. Mixed up in the strange pattern of events is a girl who says she has “lost” her home town. The workings of the trading stamp plan and the ingenious counterfeiting game, plus what Ted learns about the dangers of circumstantial evidence, make the solution of this sixth Ted Wilford mystery especially exciting and interesting.

Ted Wilford, as editor of his high school paper and school correspondent for the local weekly, is ea

When The Town Crier, the semi-weekly newspaper for which Ted Wilford writes and Nelson Morgan takes

#15 in the Ted Wilford series. The disappearance of a package containing rare plant cuttings leads

Ronald Wilford, cub reporter on the Cleveland Star, is asked by his editor to find a missing colleag

The Mystery of the False Fingertips, by James Holding (epub/Kindle/pdf)

Ted almost pushed the panic button when he heard that Mr. Sawyer had disappeared. He was the one on