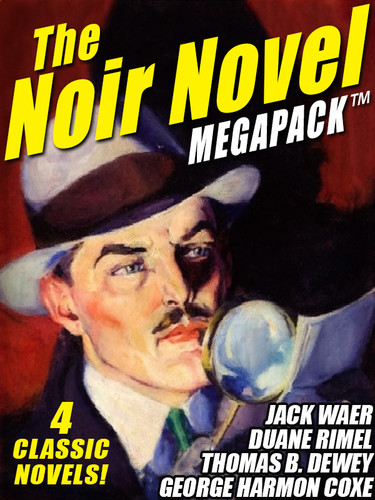 HUNTER AT LARGE, by Thomas B. Dewey ... Mickey requested a year's leave of absence from his job on the police force. What else could he do? He'd just spent five months in the hospital because he'd been the only witness to a brutal murder...and the victim was his own wife!

NEVER BET YOUR LIFE, by George Harmon Coxe ... It was a tidy Florida motel with all the important conveniences: a beautiful stretch of beach, a handy night club with a shapely chanteuse up front, and a wicked roulette wheel in the back. But when John Gannon -- a wealthy sportsman with a penchant for suicide -- showed up, the front fell away!

CARNAL PSYCHO, by Duane Rimel ... They were beautiful and they were passionate -- so he had to destroy them all -- in a way so shocking that readers will gasp!

MURDER IN LAS VEGAS, by Jack Waer ... The big-time hood lay dead on Steve's bed with three slugs from Steve's gun in his gun -- yet Steve Walters hadn't the slightest idea how he had gotten there. The wayward blonde who alone could clear his name, had taken one call to many. When Steve burst into her apartment, he found her, all right -- with her throat cut!

As America’s economic and cultural influence grew in the 20th Century, the history of the literary a