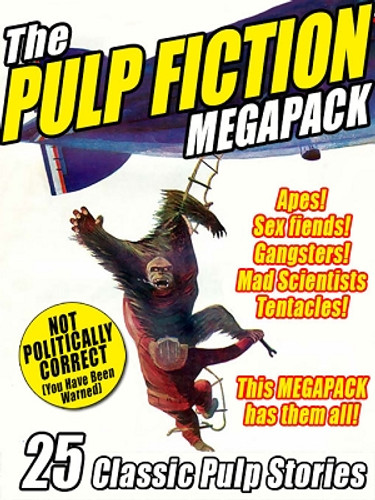 View Details
Apes! Sex fiends! Gangsters! Mad scientists! Tentacles! Yes, this MEGAPACK™ has them all, no less than 25 lurid tales ripped from the pages of pulp fiction magazines!
For The Pulp Fiction MEGAPACK™, we selected stories with great pulp titles. (Where else are you going to find stories like "Blood for the Vampire Dead," "Mistress of Snarling Death," or "When Super-Apes Plot"?) Of course, these stories were all written in a different time, with different standards of what was acceptable. They are decidedly NOT politically correct by modern standards. Please go into them aware of this fact, and if you are offended by racism, stereotypes, bad writing, sadism, or anything else prevalent in cheap literature of the early 20th century...well, this may not be the right ebook for you. But if you can sit back and enjoy these stories for what they are-simple titillations from another era-you may find some surprising treats.

BLOOD FOR THE VAMPIRE DEAD, by Robert Leslie Bellem
MISTRESS OF SNARLING DEATH, by Paul Chadwick
FIANCES FOR THE DEVIL'S DAUGHTER, by Russell Gray
THE SHRIEKING POOL, by G. T. Fleming-Roberts
DEATH MATES FOR THE LUST-LOST, by Hugh J. Gallagher
THE DOGS OF PURGATORY, by Hugh Pendexter
WHEN MANHATTAN SANK, by George S. Brooks
BRIDE OF THE APE, by Harold Ward
BLOOD-BAIT FOR HUNGRY MERMAIDS, by John Wallace
SHIP OF THE GOLDEN GHOUL, by Lazar Levi
BLACK POOL FOR HELL MAIDENS, by Hal K. Wells
DEATH FLIGHT, by Robert Wallace
THE SCALPEL OF DOOM, by Ray Cummings
SATAN DRIVES THE BUS, by Wyatt Blassingame
SERVANT OF THE BEAST, by L. Patrick Greene
THE DEAD BOOK, by Howard Hersey
WHEN SUPER-APES PLOT, by Anthony Wilder
THE YELLOW CURSE, by Lars Anderson
THE BRAIN OF MANY BODIES, by E. A. Grosser
TONG TORTURE, by Emile C. Tepperman
THE RAY OF MADNESS, by Captain S. P. Meek
THE TERRIBLE TENTACLES OF L-472, by Sewell Peaslee Wright
THE APE-MEN OF XLOTLI, by David R. Sparks
THE FLOATING ISLAND OF MADNESS, by Jason Kirby
THE CORPSE ON THE GRATING, by Hugh B. Cave

And don't forget to search this ebook store for more entries in the "Megapack" series, covering science fiction, fantasy, horror, mystery, westerns, and much, much more!
×