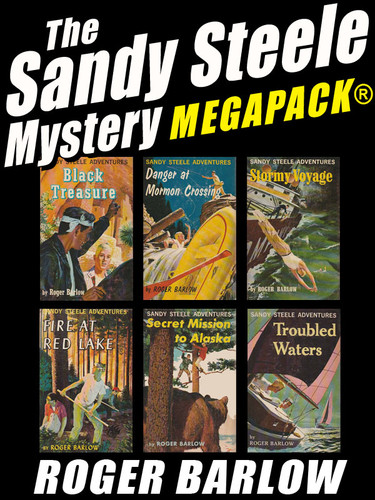 1. BLACK TREASURE
Sandy Steele and Quiz spend an action-filled summer in the oil fields of the Southwest. In their search for oil and uranium, they unmask a dangerous masquerader.

2. DANGER AT MORMON CROSSING
On a hunting trip in the Lost River section of Idaho, Sandy and Mike ride the rapids, bag a mountain lion, and stumble onto the answer to a hundred-year-old mystery.

3. STORMY VOYAGE
Sandy and Jerry James ship as deck hands on one of the “long boats” of the Great Lakes. They are plunged into a series of adventures and find themselves involved in a treacherous plot.

4. FIRE AT RED LAKE
Sandy and his friends pitch in to fight a forest fire in Minnesota. Only they and Sandy’s uncle know that there is an unexploded A-bomb in the area to add to the danger.

5. SECRET MISSION TO ALASKA
A pleasant Christmas trip turns into a startling adventure. Sandy and Jerry participate in a perilous dog-sled race, encounter a wounded bear, and are taken as hostages by a ruthless enemy.

6. TROUBLED WATERS
When Sandy and Jerry mistakenly sail off in a stranger’s sloop instead of their own, they land in a sea of trouble. Their attempts to outmaneuver a desperate crew are intertwined with fascinating sailing lore.

Without a doubt, Raphael Aloysius Lafferty (1914-2002) was one of the most quirky and unusual author