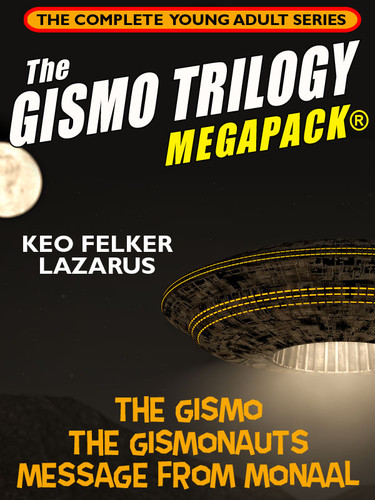 Keo Felker Lazarus (1913-1993) was an American writer remembered for her Young Adult novels, of which the “Gismo” series (comprised of The Gismo, The Gismonauts, and A Message from Monaal) was but a small part. She also wrote fantasy, historical, and western books and picture-books for younger readers, such as "The Billy Goat in the Chili Patch", "A Totem for Ti-Jacques", and "Rattlesnake Run."

In "The Gismo," Jerry Cole finds a mysterious device -- which he calls a "gismo" for lack of a better term -- that turns out to be of alien origin. It was lost by a spaceship, and the aliens’ leader, Monaal, needs it to communicate with his people. Will Jerry be able to return it, or will the adults prevent it...and ruin our first contact with Monaal’s people?

In "The Gismonauts," the action jumps farther into the future, with Jerry Cole’s grandson, Chris, encountering an alien way station set up by Monaal and his people on the moon. Monaal is still studying Earth. Can Chris keep the aliens’ secret and prove humanity is ready to join the galactic Federation?

In "A Message from Monaal," the aliens have a last test for humanity, and Chris may be the only one who can prove we are ready for galactic citizenship!

“The Gismo and its sequels are not well known beyond a generation of American kids who found them in their school classrooms and libraries. They were published for the educational market and were designed to be read by 4th to 8th grade readers in the 1970s and 1980s. (Am I dating myself if I admit to reading--and loving--The Gismo in school?) I don’t think any copies were sold commercially. That doesn’t stop this whole series from being exciting, fun books which hold up exceptionally well to this day.” --John Gregory Betancourt

The trail Mac found himself trying to follow was very cold. Another private detective -- his friend

"Harold "Hap" Miller, whose parents owned the Hanging Rock Ranch, is best friends with Jim Hawn, a b