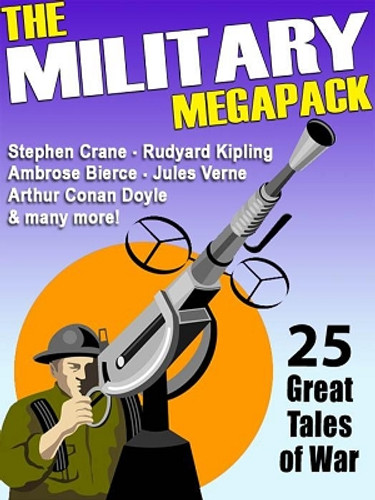 Hours of great reading await, with tales of war and military adventure by some of the greatest writers of the 19th and 20th centuries. Ranging from classics of the Civil War to the World Wars to the future of war -- and many other battlefields -- here more than 640 pages of military fiction! Included are the complete novel "The Red Badge of Courage," pulp stories by Arthur J. Burks, Johnston McCulley, Norman A. Daniels; science fiction by randall Garrett, Harry Harrison, Lester Del Rey; classics by Ambrose Bierce, Jules Verne, and Rudyard Kipling; and much, much more. (And don't forget to search for "MEGAPACK™" to find all the other great titles in this series.)

THE RED BADGE OF COURAGE, by Stephen Crane
CAPTAINS VENOMOUS, by Arthur J. Burks
A SAHIBS' WAR, by Rudyard Kipling
WHIRLWIND SQUADRON, by Robert W. Nealey
THEY DIED IN VAIN, by George Bruce
THE BLOCKADE RUNNERS, by Jules Verne
IN THE CLUTCH OF THE TURK, by Benge Atlee
THE CRIME OF THE BRIGADIER, by Arthur Conan Doyle
AN OCCURRENCE AT OWL CREEK BRIDGE, by Ambrose Bierce
WHISPERING DEATH, by Laurence Donovan
A ONE-MAN NAVY, by Eugene Cunningham
WHEN A YANK GETS FIGHTING MAD, by Lieut. Jay D. Blaufox
A MYSTERY OF HEROISM, by Stephen Crane
THE PRIVATE HISTORY OF A CAMPAIGN THAT FAILED, by Mark Twain
WITHOUT THE BLUE, by Johnston McCulley
PRIVATE WAR, by Norman A. Daniels
THE CLOUD WIZARD, by David Goodis
KILLER ACE, by David Goodis
THE FLY, by Katherine Mansfield
THE COLONEL'S IDEAS, by Guy de Maupassant
THREE MIRACULOUS SOLDIERS, by Stephen Crane
NAVY DAY, by Harry Harrison
VICTORY, by Lester del Rey
THE DEFENDERS, by Philip K. Dick
THE DESTROYERS, by Randall Garrett