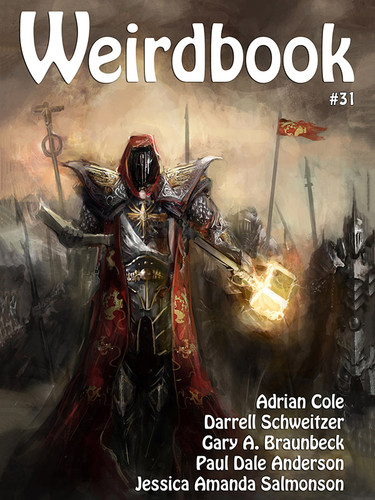 Weirdbook returns after a nearly 20-year hiatus under the editorship of Douglas Draa! Here are great fantasy and horror tales by current and upcoming masters of the genre...

Chivaine, by John R. Fultz
Give Me the Daggers, by Adrian Cole
The Music of Bleak Entrainment, by Gary A. Braunbeck
Into The Mountains with Mother Old Growth, by Christian Riley
The Grimlorn Under the Mountain, by James Aquilone
Dolls, by Paul Dale Anderson
Gut Punch, by Jason A. Wyckoff
Educational Upgrade, by Bret McCormick
Boxes of Dead Children, by Darrell Schweitzer
The Forgotten, by D.C. Lozar
Coffee with Dad’s Ghost, Jessica Amanda Salmonson
Missed It By That Much, by Gregg Chamberlain
A Clockwork Muse, by Erica Ruppert
The Rookery, by Kurt Newton
Wolf of Hunger, Wolf of Shame, by J. T. Glover
Zucchini Season, by Janet Harriett
The Jewels That Were Their Eyes, by Llanwyre Laish
The Twins, by Kevin Strange
Princess or Warrior?, by S.W. Lauden

See Me Not, by Richard Wilson (epub/Kindle/pdf)

Since H. G. Wells’ definitive THE INVISIBLE MAN, the subject of invisibility has cropped up ma

This special John Shirley issue of WEIRDBOOK presents a complete, original novel plus a selection of

What do these things have in common? A secretary at a company goes to ask for reimbursement for a ca