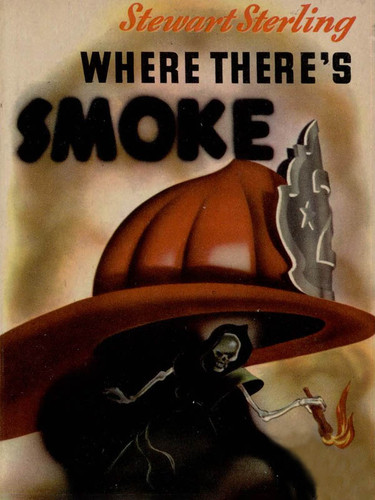 Stewart Sterling (1895-1976) was the pseudonym of Prentice Winchell, who also wrote under the names of Spencer Dean and Jay de Bekker. Winchell was born in Illinois and worked as a journalist. He preferred to write about non-typical investigative bodies; such as the Fire Brigade, for instance. He was also a screenwriter and writer of radio scripts, as well as many magazine stories. His series characters were Fire Marshal Ben Pedley and PI Gil Vine. Spencer Dean’s primary character was Don Cadee, a department store detective. (less)

There’s Death in the Heir, by Larry Holden (epub/Kindle/pdf)

It’s difficult to cash in on a will before the testator dies. But once in a while an heir will

Somewhere in This House (Lt. Valcour #2), by Rufus King (epub/Kindle/pdf)

The Sturm House has an atmosphere of the unpleasant. The shooting of Alice Tribeau only adds to the

Starting with the February, 1946 issue, every issue of the comic book Captain Marvel Adventur

The Dame Across the River, by Talmage Powell (epub/Kindle/pdf)

There was a house across the river. It meant nothing at first. Too many other things were real, thir

Crattock strained against the ropes binding his wrists behind the chair. He cursed his brother, who

The Favor, by Talmage Powell (epub/Kindle/pdf)

She wasn't an ordinary woman -- and what he did to her wasn't ordinary, either. A noir classic rippe

The action of the story all takes place in New York, beneath the shadow of the Brooklyn Bridge. Ther