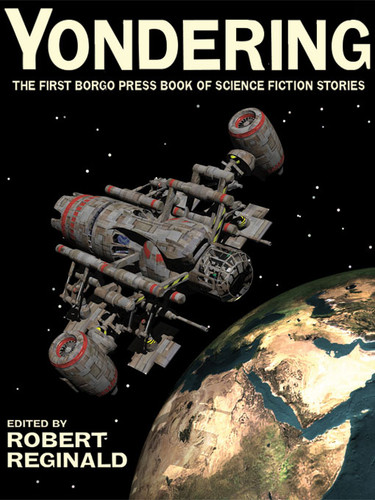 This is one of a series of anthologies of science fiction and mystery stories by Borgo Press writers that are being distributed at cost as both ebooks and paperback volumes. The first volume in the sequence, Yondering, includes a baker's dozen of original and reprint tales by fourteen writers.

In "The Quills of Henry Thomas," W. C. and Aja Bamberger give us a glimpse of a future in which music is composed through DNA computing.

John Gregory Betancourt's engaging "The Darkfishers" envisions a shanghaied Earth colony stranded on the back of a huge crustacean on an ocean planet.

"Outside Looking In," by Mark E. Burgess, takes the "world in a bottle" theme--and turns it upside down.

Victor Cilinca's "Siegfried" demonstrates the folly of taking those "primitive" aliens too lightly.

Michael R. Collings's "The Calling of Iam'Kendron" is a stirring prequel to his epic science-fantasy novel, Wordsmith.

In Arthur Jean Cox's "Evergreen," we find that long life is not always what it's cracked up to be.

"Ultra Evolution," by John Russell Fearn, is a cautionary tale about the advancement of man—not always a good thing!

Sheila Finch's "Miles to Go" is the moving story of a wheelchair marathoner faced with a crucial decision.

Mel Gilden relates mankind's first encounter with aliens in "The Little Finger of the Left Hand."

Last, and certainly not least, Ardath Mayhar's poignant "The Next Generation" shows the human race forced to make a crucial decision about its survival.

In Damien Broderick’s haunting tale, “The Meek,” the survivors of humanity’s drive toward racial sui

She was a living doll who got all wound up -- in murder! An offbeat novel about some very strange ha