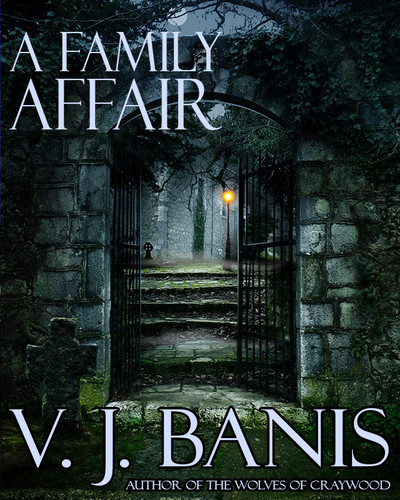 In the distance Kelsey House stood framed against the sky, its windows gleaming brightly. There was an eerie glow to the scene, that seemed to come not so much from the moon, now rising, but from things themselves, as if she were seeing the very essence of them.

But there was more to the scene than the house alone. Between where she stood and where the house stood, a group of ghostly figures danced what might have been a child’s game, or even a primitive rite of some sort. They twirled about in a circle, breaking free to spin wildly one at a time. There was the same eerie glow to the white, gauze-like gowns that they all wore: it made them look ghost-like. But the most shocking thing of all, to Jennifer’s way of thinking, was the robes they were all wearing.

For all practical purposes, the women--for this they clearly were--were naked...!

Another thrilling gothic suspense novel by a modern master.

"I see two women struggling together by the lake. I see them fall into the water... The wind rustles

When Antoinette swindled Margaree Harrod out of the old estate on Cape Breton Island, Margaree swore

Thongor and the Wizard of Lemuria, by Lin Carter (epub/Kindle)

Thongor of Valkarth -- mightiest warrior of the ancient continent of Lemuria, before the dawn of his

The Black Cat User Guide — Get the most from your membership!

Need help with the Black Cat? Here's a handy User Guide that will answer many questions, show you ho

Working as a historical reenactor in Warwick Castle, young Jenelle longs to recreate and revel in th